At Home Across The Globe

At Home Across The Globe

“As we sat down to Thanksgiving dinner back home after that first trip, I thought about the people living with hardly anything—who had mud floors and no window panes, yet who remained so upbeat and cheerful,” explains Barbara Plaugher ’84, describing the contrast between houses in Honduras and her house in Ohio. “Serving others has been my passion for 25 years.” 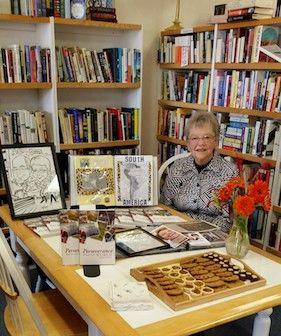 Barbara Plaugher ’84 has enjoyed sharing stories from service trips in her memoir Perseverance: Missions to the World. Photo: courtesy of Barbara Plaugher.

Barbara earned her Bachelor of Science in Professional Arts (BSPA) from Saint Joseph’s as an online student and retired after fifty years of service with Blanchard Valley Health Systems in Ohio, progressing through many nursing roles in her career including nursing supervisor, x-ray tech, lab tech, director of nursing services, director of patient services, and registered nurse in utilization and review. Barbara has also worked at Blanchard Valley Hospital as the director of risk management and quality improvement. But one of the most rewarding aspects of her adult life came outside of her workplace. It was found in the rolling mountains of Honduras, the dusty city streets of Haiti, and the crowded hillsides of Venezuela (under the protection of the National Guard).

Barbara has embodied the Core Values of Saint Joseph’s College by providing humanitarian aid to some of the poorest families across the globe through twenty volunteer service trips. She recounted these experiences in a beautiful memoir published in 2016 called Perseverance: Missions to the World. Just glancing at a few of the chapter titles provides a glimpse into the extreme situations she has experienced over the years: “Mexico 2009 during the H1N1 Flu Season and Drug Cartel Activity;” “Air Evacuated From Haiti after the Earthquake 2010;” and “Mission aborted due to a Foreign Pathogen in my Blood put me into Shock!”

These stories provide insight into the geographies, economies, and cultures of the aforementioned countries, as well as El Salvador, Guatemala, Nicaragua, Ecuador, Perú, Romania, Poland, Ukraine, and Tanzania.

Barbara’s service began in 1994 with an inaugural trip to Honduras with Volunteer Optometric Services to Humanity (VOSH), which provides free vision care and glasses to underserved populations. VOSH has 33 organizations worldwide and Barbara has served with the Ohio division for all but one mission trip.

Barbara’s husband, Arliss, has traveled with her on many of these occasions, alongside ophthalmologists, optometrists, opticians, and trained laypersons. They’ve ridden in the back of pickup trucks to distribute medications and clothing at schools and churches. They’ve conducted medical examinations and delivered worm medicine to children. During the clinics, volunteers have evaluated and provided care to as many as 850 people per day. 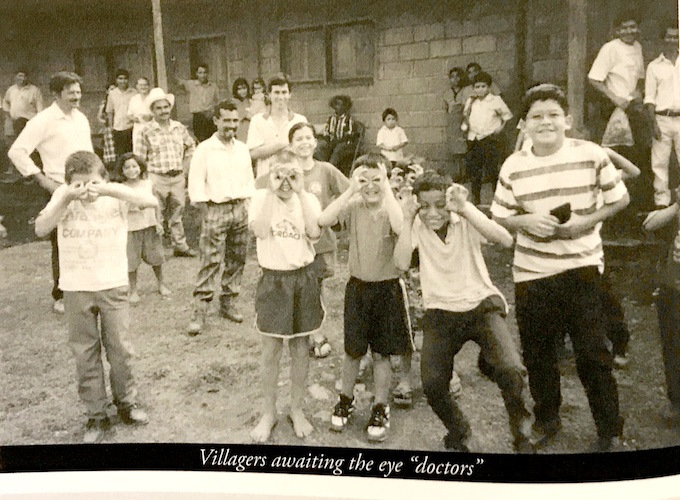 Children in Honduras playfully mimic eyeglasses with their hands while waiting at a clinic. Photo: courtesy of Barbara Plaugher.

Barbara says that the organizational skills she acquired while enrolled at Saint Joseph’s College helped her with setting up mission trips. “I used my coordination skills when pulling teams together and tying together the loose ends to make a smooth, successful mission. I needed to work with a host in a foreign country, the customs regulations of the government, my team members from many areas throughout the United States and international countries, and airlines.”

Each trip comes with its own challenges and setbacks. Proceeding through airport customs with 12,000 pairs of glasses requires a considerable amount of patience. Flight delays, cancellations, and postponements can occur for any number of reasons. In 1998 Barbara had to cancel her flight to Nicaragua due to Hurricane Mitch and she wasn’t able to make the trip until 2000. In 2010, she was evacuated from Haiti on the same plane as journalists Brian Williams, Ann Curry, and Katy Couric after the devastating 7.0 magnitude earthquake killed 250,000 people in Port-au-Prince.

Along with pertinent information about trip logistics and events, Barbara weaves into her book lyrical observations about the places she has visited—like morning sounds of goats bleating, roosters crowing, and guard dogs barking. On a mission to Ecuador in January 2006, she shares: “Ecuador is a land of extremes. The lowlands which produce coffee, bananas, and rice near the sandy beaches and warm waters of the Pacific. The Highlands with their volcanoes and two mountain ranges cradle a high, fertile valley. The Amazon Rainforest occupies much of the country’s land area. The Galapagos Islands are an ecological niche all their own. Our clinics were held in the lowlands. This was an extremely poor area with mud roads and barren homes. Bakers in all the villages sent baked goods to the team as a thank you for their services. In Los Geranios, the school children sang to the team members their song of ‘Gracias Señor.’ ”

On a commuter train to Gda´nsk, Poland, in 2002, she recalls staring out the window to see red poppies growing wildly along the tracks. This trip stands out as her favorite. Gda´nsk is the world capital for amber and she was awed by its abundance. She also viewed the famous Oliwa Cathedral organ, built in 1763, and strolled along the shore of the Baltic Sea. 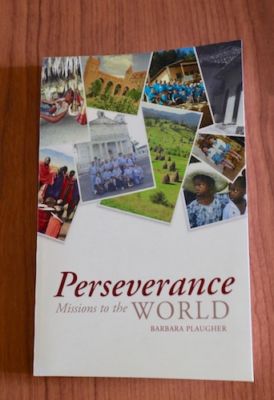 In addition to the people she has helped, Barbara values the friendships that she’s formed with fellow volunteers. Facebook has provided a convenient way to stay in touch. She continues coordinating trips and she hopes her story will help inspire others to serve, including Saint Joseph’s students. She has donated a copy of her book to the College’s Wellehan Library.

Barbara does recommend traveling as part of a group, especially when visiting certain countries experiencing political or social unrest.

"This book is written to share with those who have a desire to serve others in a most rewarding way...I do want to emphasize that there is always a need that can be met, whether locally, throughout our country or in third-world countries around the world.”