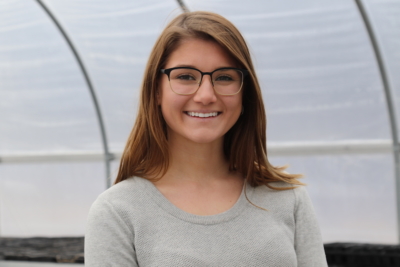 With the warm sun beating down, Hayley Winslow ’18 macheted a path through the forest in scenic Monteverde, Costa Rica. She reached her hands up high and plucked small red fruits from lush, green plants, then plopped the fruits into a wicker basket strapped to her waist. Inside each fruit, called a “cherry,” were two brown seeds, also known as coffee beans.

Being able to see, touch, and smell coffee beans straight from their source gave Hayley a better understanding of how much hands-on labor is required to produce a commodity that many Americans consume every morning. She also learned about organic standards, because she was picking beans for the certified organic coffee producer Bella Tica Cafe.

Hayley funded this volunteer experience with money from Saint Joseph’s Career Development Connections program, which provides up to $2,000 per student for experiential learning and personal growth opportunities. She chose a physically challenging sustainable food production program because,“I need to push myself, to be uncomfortable, to be constantly learning,” she said. Upon her return to the United States, Hayley stepped into a professional role as business services manager for the College’s Mission-Aligned Businesses. She reports to Executive Director for Mission-Aligned Business Peter Nielsen, alongside Assistant Program Director for the Institute for Local Food Systems Innovation (ILFSI) Elyse Caiazzo ’18. The agritourism initiatives of ILFSI call for developing the College’s historic Stone Barn as a regional event center. They also include creating a food manufacturing incubator designed to assist local food producers to scale-up production of home operations.

Hayley collects and analyzes data so that she can compose the narrative to the business plan for the day-to-day operations and management structure of ILFSI. This means she looks at costs for labor (including farmers and interns), production (like seeds and fertilizer), and operating expenses (such as electricity, heat, and insurance). She pores over spreadsheets regarding capital expenses for the greenhouse (including fans, a boiler system, and sensors) and forecasts the revenue from the lettuce and heirloom tomatoes that the College will sell.

Hayley has been learning from sustainability leaders from across the state. She visited Olivia’s Garden, a greenhouse in New Gloucester, to learn more about their farming and business operations. Olivia’s Garden grows a variety of produce including basil, tomatoes, and lettuce, using the same three systems of hydroponic farming that ILFSI will employ. Hayley has also been learning about solar energy by conversing with Revision Energy, the solar power company that will install solar panels for the College’s greenhouse.

It’s a familiar world for Hayley, who grew up bottle feeding calves on her family’s six-generation Marston Farm in Falmouth. She fondly remembers growing zucchini, picking blueberries, and preserving pickles. She learned about finance from her mom (who runs a sign shop), her dad (who rehabs buildings), and her stepmom (who works in financial planning and wealth management).

“Saint Joseph’s College has done more for me than I could have ever hoped for,” she said. 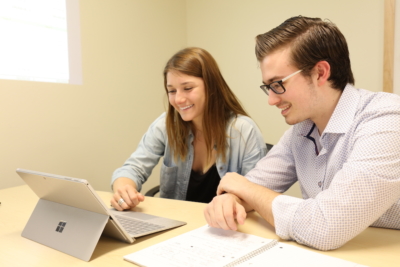 Hayley Winslow ‘18 discusses business plans for the Institute for Local Food Systems Innovation with Nick Guidi ’20, who is a renewable energy analyst intern for the College’s Mission-Aligned Businesses.

While juggling her coursework with jobs as a coach for a field hockey club travel team and as a nanny, she’s turning concepts into feasible plans for the College. She considers risk management and anticipates problems. “It’s really about creating the story of the business,” she explained. It is this entrepreneurial passion and rigorous business methods which earned Hayley the College’s Social Entrepreneurship Award, which is presented to a graduating senior who has focused on social and/or ecological value creation and worked to optimize financial value creation for an organization.

Beyond her business pursuits, Hayley competed for the Monks as a standout field hockey player and her team won two GNAC Championships. She garnered several awards including NFHCA Division III All-Region 2nd Team (2017), GNAC Defensive Player of the Year (2017), All-GNAC 1st Team (2016, 2017), and GNAC All-Tournament (2016, 2017). She was recognized for her academics through the NFHCA All-Academic (2014) and GNAC Academic All-Conference (2017) awards, served as president for the Student Athlete Advisory Council, and served as the female student representative on the Athletic Academic Committee.

“Saint Joseph’s College has done more for me than I could have ever hoped for,” she said.

For the past several years, Saint Joseph’s has developed businesses to enhance and diversify revenue streams through creative, entrepreneurial activities. The Institute for Local Food Systems Innovation (ILFSI) will offer agricultural and food industry programming designed to meet the needs of workers and lifelong learners.
Institute for Local Food Systems Innovation