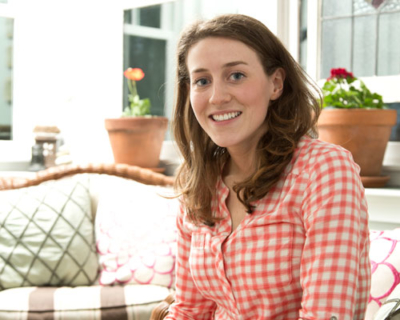 Camp Kita is named after the Abenaki word for “listen.” And that’s what Sydney Mosher ’10, her siblings, and Nichole Ivey ’08 are doing—creating a healing environment for children who have suffered loss, guided by the insight of the Mosher family.

A few days before Sydney Mosher ’10 turned 14, her father, Christopher Mosher, committed suicide. Sydney vowed to never breathe a word of it to anyone and to start her freshman year of high school pretending it never happened. “Because it happened during summer vacation, it was easy for that scenario in my mind to work out,” she says. “But, I have a group of friends—I think my mom must have told their parents—and they showed up at the funeral. Although I didn’t plan on telling them, it was very comforting that they came and showed their support.”

Even with their support, Sydney would not talk to her friends or anyone else about her father’s death, not even her sister Morgan, who was 16 at the time, or her brother Isaiah, who was 18. “Mom was always willing to talk about it with us,” she says. “She had lost her mother when she was 13, so she realized the importance of talking, but she didn’t want to force us.”

Sydney graduated from high school and headed off to Saint Joseph’s. One day a friend walked into her dorm room and noticed a picture of her father and asked if he had died. She said yes, and it turned out the friend’s father had also died. They made a Father’s Day trip together with a third classmate to visit Sydney’s father’s grave. “The trip was healing,” she says. “It had been looming over me and I was feeling guilty that I had never visited before, so that was nice to be able to do that. I don’t think I could’ve done that on my own.”

Sydney and her brother and sister all shared feelings of confusion, shame, anger, and guilt, but still, they never talked about their father’s suicide. “Survivors of a traumatic event like a parent’s suicide often experience high levels of guilt,” says Dr. Josh Schoenfeld, associate professor of psychology and the department chair. “Guilt can really wreak havoc on a person’s ability to function and get along and have a happy life. Something has happened they feel is their fault that can’t be undone. It’s like a barb. Once it’s in your skin you can’t just pull it out.”

It’s estimated that in the United States, every year between 7,000 and 12,000 children lose a parent to suicide. According to a 2010 study led by Johns Hopkins Children’s Center, children or teens who have lost a parent to suicide are three times more likely to also commit suicide and are at increased risk of developing a range of major psychiatric issues. “I didn’t go down a dangerous road,’” says Sydney, “but I’m sure pent-up anger and pent-up feelings could make someone else go off the deep end. It’s hard to separate yourself from the situation and to not think I should have called him more often or given him more hugs—that it was my fault.

“I definitely think holding those feelings in is not healthy for anyone. It helps to be in a supportive environment, and not all children are lucky enough to have that support. We had it.”

Last June, Sydney and her siblings decided to create Camp Kita, a nonprofit foundation in southern Maine that provides a therapeutic experience in a safe and supportive environment for children who have lost a parent to suicide. This year they will host a weeklong summer camp and eventually hope to have a full program with kids coming and going throughout the entire season. “Camping was very important to my dad,” says Sydney. “That was where we got to know him the most, while we were camping. It made sense that this is what we wanted to do.”

Camp Kita will offer a variety of healing opportunities within a traditional camp experience. “That’s why we’re excited about this camp,” Sydney says. “We want to have that traditional therapy one-on-one with a counselor, but we also want to introduce other methods for therapy, like music and art and equine therapy. They’ll be intermingled with different camp activities. It’s not necessarily getting healed, because that’s not the point. It’s trying to find options that work and having a week of fun—the therapy is the bonus.”

Nichole Ivey ’08 is a high school friend of Morgan’s and was at Saint Joseph’s with Sydney. When she heard about Camp Kita, she jumped in with both feet to help and is now director of public relations and development. “The big idea behind Camp Kita is that not everyone grieves in the same way,” she says. “Maybe talk therapy works for some people, but it doesn’t for others, and maybe equine therapy works or maybe art therapy works. By giving kids these skills for effective grief management, hopefully they’ll go on to thrive throughout their lives.”

When Christopher Mosher took his own life, he left his children feeling confused, sad, guilty, and isolated. Twelve years later, they created Camp Kita to help other children heal, but it has also given them the opportunity to finally open up and begin their own healing. And no matter what he did or how much it hurt them, Sydney wants people to know this about her father: “He was really loving and supportive in other ways and adventurous and fun.”

To find more information about Camp Kita, and ways to help support its mission, visit campkita.com.

An Eye on Signs, with Dr. Josh Schoenfeld

When children experience a traumatic event, a well-meaning adult might feel the need to get them to a therapist as soon as possible. Imposing therapy or some other specific program prematurely can actually backfire and make things worse, says Dr. Josh Schoenfeld. “Research has shown that we don’t need to make people do ‘this or that’ after a trauma. People, including children, have coping mechanisms and often recover in their own way. What they usually need is time and a safe, loving, supportive environment.”

Dr. Schoenfeld recommends that parents take their cues from the child and be on the lookout for possible warning signs that extra help might be necessary. “Obviously, a child who has been through a trauma is going to be upset,” he says. “That’s fine. It’s when you start to see a significant, persistent, and consistent change in personality, mood, or behavior—something that really sinks in—that would be a warning sign.”