A campaign to reinforce Saint Joseph’s as a welcoming community 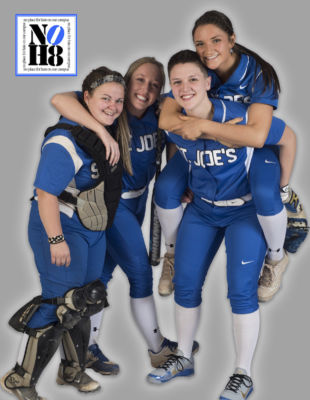 By extending their presence to athletic contests, the NOH8 campaign received greater visibility. Announcers even spread news about the campaign to fans watching online through the Monks’ live stream service. Photo: David Bates.

The Counseling Center provides training, consultation, assessments, and therapy to students. In August of 2017 the center recognized an opportunity to extend their messaging about inclusiveness beyond their office walls. With support from fellow staff, faculty, and students, they launched a movement to emphasize the importance of respect and civility called Stand Up 2 H8, or NOH8 for short. While other organizations have used similar messaging, this campaign is specific to the College and not affiliated with any national groups.

Students now live in a world of constant communication where Snaps and Insta Stories containing information about hate-filled national events remain just a finger swipe away. Online and offline, discourse has become increasingly volatile on a global level. NOH8’s mission is to emphasize civility, challenge disrespectful behaviors, and  to uphold the College’s Core Values of Faith, Excellence, Integrity, Community, Respect, Compassion, and Justice.

The most recent Campus Safety and Security Report (for Reporting Year 2016) shows that zero hate crimes were reported at Saint Joseph’s in 2014, 2015, and 2016.

“The initiative was not formed in response to any incident on campus,” explained Counseling Center Director Liz Wiesen, but rather, “serves as a proactive approach  to ensuring that the Saint Joseph’s community remains a place where all people are free to work and learn without fear of humiliation, intimidation, discrimination, or harm.”

Through tabling events at lunch in Pearson’s Cafe, and at fairs for wellness and sustainability, members of the NOH8 working group have shared information about how to create welcoming environments. Katie Hunter ’20, who is majoring in psychology, volunteered at some of these events. “I can’t stress enough how important it is to have campaigns like this on college campuses everywhere. Not only does it promote friendly behaviors, but it also promotes safe behaviors, which is just as important and is often overlooked,” she said. Students, faculty, and staff were given the opportunity to pledge to stand up to hate by filling out a piece of paper that was added to a decorative tree. So far, over 500 people have pledged. 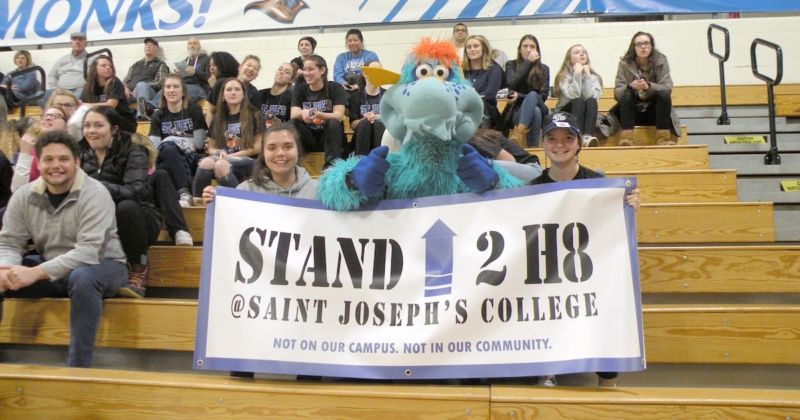 David Tuttle ’18, who is majoring in sports communications, has volunteered with the NOH8 campaign, dressing
up as the College’s character “Blue” at athletic contests. Photo: courtesy of NOH8 Campaign.

David Tuttle ’18, who is majoring in sports communications, has volunteered with the NOH8 campaign, dressing up as the College’s lake-inspired character “Blue” at athletic contests because, he said, “I have always been a firm believer in equality, no matter the circumstances. We are all people sharing the space given to us on this planet and each person has the freedom to make decisions despite what others say about them. By wearing the costume at select sports events on campus, I feel that in a way I am representing the school throughout the campaign, almost as an ambassador.”

The NOH8 Committee provided the men’s basketball team with warm-up t-shirts and even brought an ice cream truck to a softball game. Swag, such as hats, stickers, beads, and signs are the first iteration of awareness, deployed to generate visibility and energy for the campaign. They hope to build on the momentum gained last year by focusing future events on how to respond as a bystander to mean-spirited words of intolerance.

For students like David Tuttle, creating a “home away from home” is an integral part of the college experience. “Beliefs can bring us together, or divide us. But in the end, we have to accept that not everyone is going to think or act the same way as we do. That is what makes everyone unique in their own way,” he said.