Politics (Not) as Usual

Politics (Not) as Usual 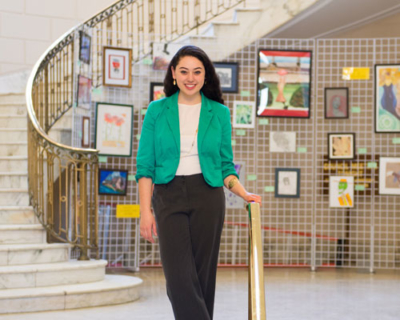 She’s two years in and already Sara Poirier is making a case for the time she’s spent at Saint Joseph’s. As a political science major, a journalism and philosophy minor, and president of the Political Science Club, she’s made more than a fair effort to get the most experience she can and to put political science on the minds of students. But how?

Astonishingly, “We don’t talk politics,” she says. In the Political Science Club, “We’ll bring up politics, but we’re mostly focused on putting on events and marketing it as an asset of the College. I want it to be about political science, policy, and government—not party politics.”

There’s more to that statement than just the welcoming attitude. Since she’s taken the helm of the Political Science Club, Poirier’s done her due diligence to increase campus recognition of the major and the club’s activities. “Having a neutral club is great,” she says. “When we have forums and debates, that’s a good place for discussing politics.” And that’s a promise she’s already made good on.

Poirier hosted what is thought to be the College’s first-ever student debate this spring, in the Viola George Auditorium. Two teams of students from the College discussed the pros and cons of various items, like whether or not social media has a positive or negative impact in our lives.

The seed for all this work, while it continues to grow at the College, is rooted in Poirier’s past. From Winslow, Maine, she remembers “the five o’clock news was always on around dinner time, and I have very vocal family members.” But it wasn’t until late in high school when she aimed her studies toward political science. “I had a very enthusiastic teacher for U.S. history and American government. He really inspired me.” She originally thought she’d go to college for pharmacy, but after her experience in high school her journey into political science took off. She’s since held internships in the communications office of Maine Governor Paul LePage and the office of Senator Susan Collins. Currently, she volunteers for Senator Collins’ re-election campaign.

There’s no doubt that Poirier keeps a full schedule, but she’s happy with that. “Sure, it’s a balancing act,” she says, “but I enjoy everything I’m doing, so that makes it really easy.

“If you follow what you’re passionate about, the rest will take care of itself. As long as I’m doing what I love, and am happy doing it, I’ll let life lead the way.”