All Roads Lead to the Farm

All Roads Lead to the Farm Danny (left) and Jon Shaw stand on the Shaw Brothers Family Foundation’s land in Gorham, which will be used for recreational and farming purposes. Photo: Emma Deans.

Jon and Danny Shaw grew up on a dairy farm in Gorham, Maine, where they learned about caring for animals and stewarding the land. They developed a strong work ethic, as all farmers must, and used that discipline to start their own small construction business in 1977. Their company’s origin story describes it best: “Two brothers, a backhoe, and a handshake.”

Fast forward to 2018 and Shaw Brothers Construction employs over 250 workers and owns hundreds of pieces of equipment. They have completed thousands of projects across southern Maine, each ranging from $5 thousand to $15 million. Their headquarters on Mosher Road in Gorham features a stunning office with vaulted ceilings and beautiful glass décor.

Philanthropy has always been woven into the fabric of their business—from sponsoring local baseball and softball teams to donating to Camp Sunshine—and in 2016 they generously donated $100,000 to Saint Joseph’s College toward the construction of the future new livestock barn that will be part of the Institute for Local Food Systems Innovation (ILFSI). The Institute will serve as an innovation hub for sustainable agriculture and economic development. It will feature a hydroponic farm, a crop and livestock farm, the Stone Barn as an agritourism enterprise, and commercial kitchen space to help small and midsize food producers scale-up their businesses. Through partnerships with organizations like the Greater Portland Council of Governments, the Hannaford Charitable Foundation, and Shaw Brothers, the College aims to bring together diverse members to meet regional food security goals and develop the state’s food and beverage industry.

Just a few miles down the road from the Institute, the Presumpscot River flows from its source at Sebago Lake. In 2016 the Shaw Brothers Family Foundation purchased 258 acres along the Presumpscot River in Gorham (about twenty minutes from campus) to develop a space for public recreation. They have cleared much of this land of trees that were planted in the 1960s in order to return it to hayfields. They are building trails for cross-country skiing, snowshoeing, snowmobiling, and a skating pond in the winter. Beyond recreating, they want this land to include farming opportunities, especially for young, up-and-coming farmers. “We’d like to help grow local food and help students learn,” said Jon Shaw. 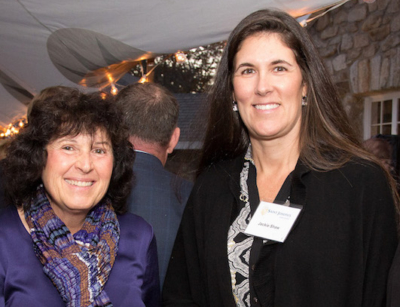 The edge of this property is advantageously situated on Route 25—a main thoroughfare for commuters traveling from the Lakes Region into Portland. The Foundation will lease parcels of this prime real estate to a few businesses, with the stipulation that they encompass some sort of a local food, farming, or agritourism focus, and the lease income will go to the Foundation to support its mission indefinitely. The first of these businesses, Sebago Brewing Company, has signed a 100-year lease. Their new brewery opened this past spring and includes a production plant, tasting room, restaurant, and offices. As locals and tourists clink beer glasses and dine on wood-fired pizza, they gaze out at fields that can be traced back to a land grant from 1730 belonging to John Tyng of Massachusetts during the reign of British King George II.

Two historic farms—the Rines family’s Walnut Crest Farm and the Mosher family’s Long View Farm—border the Shaw Brothers Family Foundation’s land. The Rines family has owned their farm since the 1890s and can trace their lineage back to Gorham’s first settler, John Phinney, who paddled up the Presumpscot in 1736. The Moshers were the third family to settle in Gorham; Daniel Mosher moved to town in 1738 and his descendants have been farming ever since. In 2013 the Cumberland County Farm Bureau awarded Albert Erlon Mosher with its first Heritage Farm Award, signified by a granite hitching post. It’s a special area for the town of Gorham, which has experienced significant demographic changes in the past four decades due to commercial and residential development. As one of the state’s fastest growing towns, the census increased by 1,000 residents between 2010 and 2016. Housing cul-de-sacs and condos have replaced working farms, which begs the question: how can the state’s 14th largest municipality hold onto its agrarian past while continuing to grow as a bedroom community for Portland?

The Shaw brothers are doing their part to help by saving a piece of land that once was considered for a waste energy recovery plant. The Foundation purchased the land from ecomaine, which provides solid waste and recycling services to Maine communities, including Gorham. Ecomaine ultimately deemed that developing the land for their business would be too costly and unsuitable for a landfill, given the wetland area by the river. This project is especially close to the Shaw brothers’ hearts, because their grandfather, Herb Shaw, once rented this piece of land to harvest hay. They want to honor his legacy with a job well done. “It will be something that will continue to live on forever,” said Jon Shaw. Pursuing new initiatives like the Institute for Local Food Systems Innovation requires strategic alliances with neighboring businesses who believe in the College’s mission. The Shaw brothers are helping cultivate community, literally from the ground up.

Building on Saint Joseph’s College’s historic commitment to sustainability and community engagement, the Institute for Local Food Systems Innovation will support Maine’s sustainable agriculture community and food and beverage industry, by identifying and developing educational programs and resources that will meet their needs.
Local Food