The Hunger Games series is a fan favorite in popular culture. It happens to also be a favorite on college campuses—both for the students and faculty.

The Hunger Games trilogy, written by Suzanne Collins, has struck a chord with the American public. In 2011, The Hunger Games ranked as the third most banned book series in America, but that did nothing to stem its popularity. By 2012, 27.7 million copies had been sold in the United States.

“I saw the way students were tearing through The Hunger Games trilogy,” says Dr. Michelle Laughran, associate professor of history. “People who weren’t even avid readers had their faces buried in these books and were blowing through a thousand pages in a week or two. It really amazed me. As educators, it’s our job to plug into that interest and make sure people get the most out of it.” To add to that interest, which was felt across Saint Joseph’s and other college and university campuses around the world, Laughran created the College’s very own Hunger Games panel, which was held last fall.

So, how can we examine a fictional series about a 16-year-old girl living in a futuristic dystopia? The panel—made up of four faculty members—dug deep into the story’s plot, examining it through the lenses of their respective fields of expertise: psychology, sociology, communications, and political science.

In the series, popularity just may equal survival. At the annual Hunger Games event, representatives from “districts” are gathered together in a large, outdoor arena, with its perimeters sealed. These representatives—some scared, some emboldened—are forced to compete in a game of survival, battling natural and manmade dangers of the arena and each other. The Hunger Games event ends when there is one lone survivor.

Aside from the shear brute nature of the event, where the worst is sometimes brought out of the individuals, there’s something to be said about how each person is perceived in the eyes of the general public. When the public is pleased with a representative, they can provide gifts to him or her—like healing balms. So, the series’ main character, Katniss Everdeen, must learn to not only survive but also how to be a winner in the court of public opinion—which she does by pretending to be in love with Peeta Mellark, another representative caught up in the arena.

“The book raises the issue of authenticity,” says Dr. Josh Schoenfeld, associate professor of psychology. “Authenticity, in a human sense, means communicating and acting in a way that is true to what you are really thinking and feeling.” John Hufstader, associate professor of communications, agrees, having seen how appearance and authenticity impact even those who are perceived to be the strongest. Effie Trinket, a representative from The Capitol and who acts as an official escort to Katniss and Peeta, is literally covered in false impressions. In the film, “she’s seen as powerful and strong when the camera’s pulled back,” says Hufstader. “But when it zooms in, you can see how phony she is,” with excessive makeup and even a jittery demeanor.

Like Katniss, people are often forced to play a role to gain attention. This fabrication of identity isn’t anything new. Both on television and in everyday life people are driven to present a kind of false image in order to get attention.

“We have turned attention into a commodity,” says Schoenfeld. “Attention now equals money.” And in The Hunger Games, positive attention equals survival. 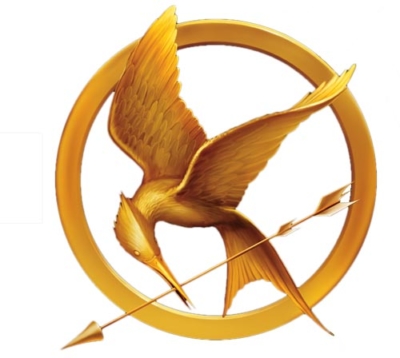 Media studies have long been a component to how experts examine society. And it’s no different in The Hunger Games. In the fictional nation of Panem, popular culture and the media play a fundamental role in the publicizing and oppression of the communities. By broadcasting the Hunger Games contest, citizens are practically forced to accept their own subjugation. Entertainment, it seems, distracts people from thinking about themselves as something more important than the contrived broadcasts.

“The separation between factual hard news with serious relevance, such as poverty and inequality, and the soft news of infotainment is often hard to see,” says Dr. Katrina Hoop, associate professor of sociology. “The rise of infotainment, or information-based media that includes entertainment, distracts the public from important issues.”

The media also distracts audiences through commercials and pushes people to consume as many items as possible, even if it means going beyond their budget.

“In America you can live what is considered a decent life and still be very poor,” says Hoop. “You can lack basic healthcare coverage or live in an underdeveloped community with bad infrastructure, but because of cheap goods and consumption, coupled with distraction by the media, we are led to believe inequality doesn’t exist or isn’t as bad because on the surface our lives are comfortable.”

The districts in The Hunger Games vary in a number of ways, but one obvious point where they begin to take on different characteristics is in the health and skill of their representatives in the Hunger Games arena. “Tributes,” as they are called, from District1 are often stronger and more formidable than those from District 12. Inequality exists between the districts as well as within the districts. There is a stratification of power in the books that resembles the one that exists in the real world.

“It’s not that we just have inequality amongst very rich countries and very poor countries,” says Mark Hibben, associate professor of political science. “You also have high amounts of inequality within wealthy states.”

These socioeconomic differences can be seen in District 12. The poorest people of the district, like Katniss, come from the “Seam,” who work in the coal mines and are on the edge of starvation most days. People who live in the villages of the Games’ winners no longer need to work and have more food than is necessary. The contrast in the lives of people from the Seam and the winners’ villages are radically different.

“Over the last 30 years, development strategies have impacted global inequality,” says Hibben. “The Washington Consensus, popular with institutions like the IMF and World Bank, is a development model that pushes opening up markets and sometimes reinforces things you see inThe Hunger Games books, including inequality, dislocation, and alienation.”

Two development strategies that have affected inequality today are dependency theory and modernization theory. Dependency theory blames colonial history for the lack of growth in certain parts of the world, while modernization blames corrupt institutions. This has left some areas poor even though they are resource-rich and around a billion people live on $1.25 a day. The mass inequality described in the books is not too far off from that very reality.

Implications for the Future

The Hunger Games brings to light many important issues that should be addressed both nationally and internationally. Suzanne Collins’ thought-provoking story has caught the public’s imagination because the themes are eerily relatable to the real world. This may be a simple story about one girl and her struggle to survive, but it could be something much deeper than that.