In fitness, business, and life, Tommy Dahlborg ’18 puts in effort and reaps rewards

At 7:30 AM on a Tuesday morning, Tommy Dahlborg ’18 walks into the weight room in Alfond Center and greets Professor Mary Lynn Engel. Normally, Professor Engel instructs Tommy in business coursework but today she is the student and Tommy is her personal trainer. As Professor Engel stretches her biceps and hamstrings she says to Tommy, “Did you see that Loyola game? Unbelievable win!” 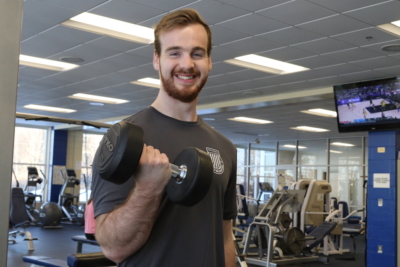 In addition to personal training, Tommy has served as an RA, as a business department representative to the Academic Senate, and as president of the Business Club, through which he’s volunteered at Catherine’s Cupboard food pantry. He was inducted into the Delta Epsilon Sigma Society, a national scholastic honor society for students, faculty, and alumni of colleges and universities with a Catholic tradition. He was also inducted into Sigma Beta Delta, a business honor society. Photo: Emma Deans.

The two chat about March Madness basketball and walk to the mirrored section of the fitness facility where Professor Engel lifts weights. “Great job, keep it up, just two more!” encourages Tommy. When Professor Engel moves over to a set of ropes to strengthen her triceps, Tommy demonstrates the proper technique of how her arms should extend. Unlike the stereotypical image of a screaming, ruthless trainer, Tommy is soft spoken and patient.

He earned his national certification through the National Academy of Sports Medicine (NASM) so that he can train members of the Saint Joseph’s community, including Professor Engel. It’s been a remarkable journey for Tommy, who describes his undergraduate experience as transformational.

“When I was a freshman, I was timid. Then I started working as the Welcome Desk Supervisor in the Alfond Center. Being in that environment pushed me to get involved in the weight room. I lost 80 pounds. I became stronger physically and mentally.”

Tommy enjoys being someone who people can turn to for support. “It’s nice to be a mentor, to train others. Customer service is one of my favorite aspects of the job.” His strong skills in customer service have also supported his business interests. Through a sales-oriented internship at Enterprise Rent-A-Car, he sold more rental contracts than any other intern. 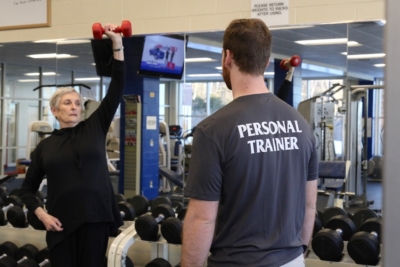 “The professors at Saint Joseph’s truly care about their students and they want to get their students into the field. Professor Zerillo essentially set up another internship for me with Casco Federal Credit Union. I learned about what determines a credit score, loans, and diversifying portfolios.”

Over the past four years he has also strengthened his spiritual life. “I’ve grown in my faith and have pulled closer to God.” He volunteered at food pantries in New Orleans with the College’s Spring Break Workfest program. He also established a Men’s Prayer Group with Resident Minister of the Mercy Center Cole Milazzo ’16. The group of men gather to foster a close connection with fellow students and create a space filled with reflection and support. An opening prayer is followed by open-ended questions about Scripture.

While he hopes to pursue a finance career and continue personal training on the side, he said, “I’ll go where God takes me.”