It was such an honor and privilege to be selected to live in Xavier Hall,” says Margaret Morrissette LeTourneau ’70 as she looks across Xavier’s first floor lounge. Forty years have passed since she has visited campus and on this sunny afternoon in August 2018 she feels transported back to the 1960s.

“You felt charm upon entering Xavier. It was used for entertaining purposes. Lovely winged-back chairs were arranged over here for private chats,” she explains while motioning to an area near the windows. “We held so many functions in this room—Parents’ Weekend, lectures with political guests, musical ensembles, and plays. We enjoyed listening to the excellent student singing group called The Miss Demeanors.”

During Margaret’s years at Saint Joseph’s from 1966-1970, for special functions the well-mannered ladies wore white gloves, sipped tea, and exemplified gentility. They gathered in Xavier for social events, reveling in the esteem of such a well furnished building with its plush couches, thick carpets, and winding staircase. “Everything was done with great thought and detail. It was dignified and serene, but also had a sense of comfort,” she says.

Xavier, the College’s iconic Tudor-style building, was part of the original Verrill estate. The Sisters of Mercy purchased the estate in order to move the College from Portland to Standish in 1956. Although the first floor lounge remains a gathering location for the campus community, the rest of the building has been repurposed for administrative offices.

Margaret’s bedroom during her senior year was located on the second floor of Xavier, which now serves as the President’s Office. “My room was elegant. It had a fireplace, a private bath, and it overlooked Sebago Lake and the White Mountains. Sister Mary Monica lived next door to me and she was a doll! She never complained about late hours, late night chats, or music. We were all very close with the Sisters. You could talk with them. If you missed class, it did not go unnoticed. Many times there would be a knock on your door to see if you were okay.” SJC students hold signs saying “Stop the War” and “Peace” during a vigil in the 1969-70 school year. Photo: courtesy of Shield Yearbook.

Margaret says that she and her classmates were not rabble-rousers—at least most of the time. They respected the College, worked hard, and challenged themselves with demanding intellectual pursuits. Yet, by the late ’60s the world was changing. Activism related to women’s rights, the Vietnam War, and racial desegregation swept across the nation. Tie-dye-clad free spirits convened in San Francisco’s Haight-Ashbury District during Summer of Love in ’67 and at Woodstock in ’69. During Margaret’s senior year, a man landed on the moon. Richard Nixon served as president, the first Earth Day was celebrated, and Congress lowered the voting age to 18.

Even though Saint Joseph’s was tucked away in a rural corner of America, ripples from these social movements spread onto campus as students began to find their voices. “We needed to step up and speak out,” explains Margaret. She described areas of inequality that needed experienced. For example, she held two jobs while attending College—at Valle’s Steakhouse Restaurant and at Jordan Marsh, a department store. “Even though I worked at Jordan Marsh they denied me a credit card because I was a woman,” she says.

Flipping through the 1970 yearbook, portraits of Saint Joseph’s students convey formality. Each woman wears an elegant v-cut top and boasts an impeccable hairstyle—a bob, a pixie cut, or shoulder-length locks neatly parted in the middle. The candid photos, however, tell a different story. Women link arms while laughing in the hallways, women play cards, shoot pool, smoke cigarettes. They wear bell bottoms and oversized sunglasses and bandanas. They light candles for vigils and march with signs declaring, “Stop the War” and “Peace.”

And then came “The Great Debate.”

It was the debate to end all debates. Should Saint Joseph’s admit male students?

“It was controversial. I was in favor of the college going co-ed and I spoke at the debate. It was held right here on the first floor of Xavier during Parents Weekend in the fall of 1969. The chairs were arranged in rows, facing the podium. I was so nervous. Many people were not ready for the change, but I knew it was the right thing to do.” -Margaret Morrissette LeTourneau ’70

The decision was made: Saint Joseph’s would become co-ed the following school year, 1970-1971. Although Margaret would be an alum by then, she felt good about the decision as she prepared for her own next life chapter. “As seniors, we were planning on being career women even though some were already engaged to be wed. Professors were excellent at setting up job placement interviews. I was hired and signed my contract to teach fourth grade in South Portland in March of my senior year.” 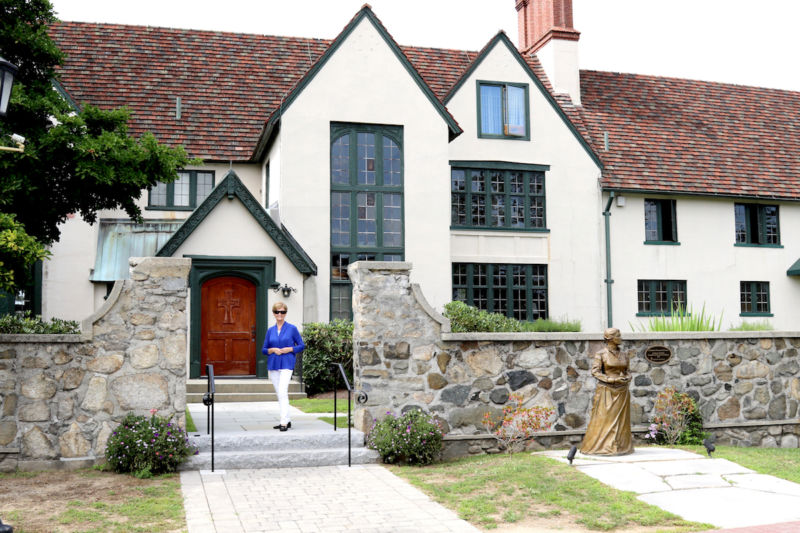 Margaret says the entrance to Xavier Hall is “where we chatted, met our dates, and invited the world into the charm of Saint Joseph’s.” Photo: Emma Joyce.

Margaret served as an elementary teacher for 38 years, moving among several schools in South Portland for first through fourth grade. “I was constantly trying new things and expanding my skill set as an educator,” she says.

This regard for personal growth has followed her to her new home in Clearwater, Florida, where she and her husband have retired. Margaret is very proactive about embracing a healthy lifestyle. She line dances at three different clubs, works out at a gym, and eats mindfully.

The benefits of such discipline are evident immediately upon striking up a conversation with Margaret. She exudes energy. Her eyes twinkle. The charm and grace of which she spoke in referring to her College days still flows from her.

Her outlook about retirement years is upbeat and radiant. She enjoys spending time with her two children and five grandchildren. Though she visits Maine every now and then, she values the opportunities available to her in Florida. “My best life is beginning because I have the freedom and time to learn new things. I have a wonderful community. I am so grateful.”