At the public pier in Wells, Maine, gulls swoop and cry. Saltwater rocks boats back and forth as fishermen haul traps, children dash across docks, and warm summer sun radiates across the faces of locals and tourists alike. Below the docks the ocean water teems with life—barnacles, starfish, and sea urchins galore. It’s a scientist’s paradise—so many specimens to study, so much data to collect. It is this pier, located within the Wells National Estuarine Research Reserve, where Saint Joseph’s College student Brooke Murch conducted research last summer.

While most time-lapse cameras capture breathtaking sunsets and clouds rolling across expansive skies, Brooke spent the summer of 2017 using time-lapse video methods to study the opening and closing of mussels. Since mussels are filter feeders, she developed a method for documenting the relationship between mussels opening their shells (this is called gape) and environmental conditions.

Brooke also used another method based on a Hall effect sensor, which produces voltage in response to a magnetic field, in order to track the time and length of each mussel’s gape. She glued a sensor and a magnet on either side of each mussel’s shell, then wired a miniature, low-cost, computer called a Raspberry Pi 3 to the sensor. The Raspberry Pi essentially serves as a “brain” that controls the sensor and logs data continuously with built-in software. The mussels were submerged in approximately two gallons of seawater in the physiology lab at Saint Joseph’s College and left alone to obtain data. She then hooked an Arduino analog-to-digital converter (ADC) to the Raspberry Pi so that the analog voltage converted to a digital output, which could be read and interpreted.

Having tested her mussel gape method in the lab several times, Brooke’s setup is now ready to be deployed at the Wells Estuary, with a few modifications—the mussels have been caged in lobster mesh for protection from lurking predators, and the cables are longer to allow for more variability in placement. This method could help scientists understand how environmental conditions such as temperature change, pH, and salinity can affect the reactions and lifestyle of mussels. Brooke received guidance for this project from Dr. Steve Jury and Dr. Ryan Dorland, professors of science at Saint Joseph’s College, as well as Dr. Jason Goldstein, research director of the Wells National Estuarine Research Reserve. Dr. Goldstein said, “Here at the Wells Reserve we have worked hard to create and foster an innovative and productive research program with students and faculty at Saint Joseph's College through collaborative grant projects and experiential learning activities. Our most recent project with Drs. Dorland and Jury seeks to find better ways to harness affordable technology to monitor and gather data for some of the most important ecosystems on the planet and in Maine, estuaries. As research director, I cannot think of a better way to engage students, faculty, and the community to steer our boat into new and exciting opportunities.”

The Wells National Estuarine Research Reserve, located an hour south of Saint Joseph’s, works to expand knowledge about coasts and estuaries, engage people in environmental learning, and involve communities in conserving natural resources, all with a goal of protecting and restoring coastal ecosystems around the Gulf of Maine. The partnership with Saint Joseph’s “provides another scientific field experience for students different from the lakes and mountains,” explained Dr. Jury. 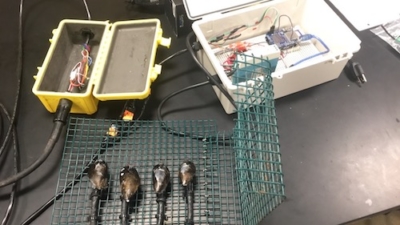 Saint Joseph’s College offers several research and scholarship opportunities for students interested in pursuing science at a college that has convenient access to the ocean, mountains, lakes, and rivers. Most recently, the National Science Foundation (NSF) has awarded Saint Joseph’s College a five-year $647,000 grant to encourage academically-talented students, who have demonstrated need of financial assistance, to enter into and succeed in a community of young scientists. The first group of Saint Joseph’s College Science Scholars will be selected from first-year students entering in the fall of 2018 who are committed to pursuing a range of fields, including: chemistry, biology, environmental science, biochemistry, and marine science. Learn more at  www.sjcme.edu/science.