Caleb Gravel ’19 Researches Genetics of the Smelt in Sebago Lake

Caleb Gravel ’19 Researches Genetics of the Smelt in Sebago Lake As an avid outdoor enthusiast and environmental science major, Caleb Gravel ’19 of Rochester, NH, understands ecological interdependence and devotes his research to keeping our ecosystem healthy. When he wasn’t fishing, kayaking, or hiking this year, Caleb was working in the Saint Joseph’s College of Maine molecular biology laboratory on a key species in the Sebago Lake food chain: freshwater smelt. Between 2002-2006, an anadromous rainbow smelt (Osmerus mordax) stocking project–spearheaded by the Sebago Lake Anglers Association–tried to address a problem in the Sebago Lake ecosystem: the abundance of forage, smelt, was inadequate for both lake trout and landlocked salmon.

“MDIFW believes that the anadromous rainbow smelt stocking program did not contribute much to smelt abundance and stabilization of the Sebago Lake population during that time period, but their contribution, genetically, was unknown,” said James “Jim” Pellerin, regional biologist for the Maine Department of Inland Fisheries and Wildlife (MDIFW).

Caleb’s research changed that understanding. How? By using the genetic difference between freshwater rainbow smelt and anadromous rainbow smelt to measure changes in genetic diversity over time in the Sebago Lake population.

“Before the smelt project, I only thought of stocking programs from an angler’s perspective. I thought of them as just adding fish to lakes and ponds for the fishermen’s benefit. But after working on the project, I realized, and learned, that stocking programs also help sustain aquatic ecosystems. Smelt are an important food source for lake trout and salmon, so the program not only benefits anglers, it also supplements the food chain of Sebago Lake,” Caleb said.

Sitting at his lab bench with a pale, iridescent smelt of about six inches in length laid out before him, Caleb said, “The stocking program consisted of adding anadromous rainbow smelt, which are fish that migrate from the sea to shallow freshwater streams to spawn. Though both the landlocked and anadromous smelt contain the same mitochondrial gene, they have different gene sequences, known as haplotypes.”

With guidance from his advisor, biology professor Dr. Lucas Bernacki, and financial support from the Maine Space Grant Consortium, Caleb tackled this research question: Did the stocking of anadromous smelt contribute, genetically, to the population of landlocked smelt? The MDIFW provided Caleb with 60 rainbow smelt collected from Quimby Brook (that drains into Sebago Lake near the Songo River). Using this sample, Caleb discovered that from 2007 to 2017, the frequency of “haplotype A”–the genetic marker for the anadromous smelt–increased from seven percent to 25 percent. He found that the haplotype diversity of the smelt sample also increased from 13 percent to 38 percent over that same time period.

In short, the data showed that the anadromous smelt from the short-term stocking program and the freshwater landlocked smelt interbred.

Pellerin said, “The State enjoys partnering with higher ed. institutions, like Saint Joseph’s College. Students are able to undertake projects that we don’t have time, funding, or resources to research. It fills a niche and their research is well received by the Department.” 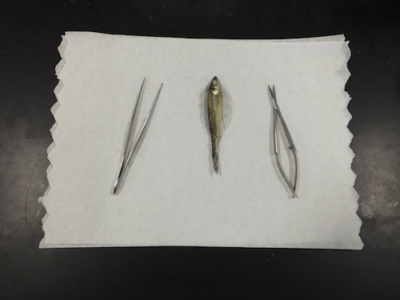 As for Caleb, the smelt project connects his passion for the outdoors with his research interests: “I really enjoy being outside, learning about the environment and wildlife, and taking in all of the scenery and natural beauty. That’s why I decided to major in environmental science so that I can conserve, protect, and be surrounded by what I love.”

Saint Joseph’s College offers several research and scholarship opportunities for students interested in pursuing science at a college that has convenient access to the ocean, mountains, lakes, and rivers. Most recently, the National Science Foundation (NSF) has awarded Saint Joseph’s College a five-year $647,000 grant to encourage academically-talented students, who have demonstrated need of financial assistance, to enter into and succeed in a community of young scientists. The first group of Saint Joseph’s College Science Scholars will be selected from first-year students entering in the fall of 2018 who are committed to pursuing a range of fields, including: chemistry, biology, environmental science, biochemistry, and marine science. Learn more at www.sjcme.edu/science.