A Commitment to Justice

A Commitment to Justice 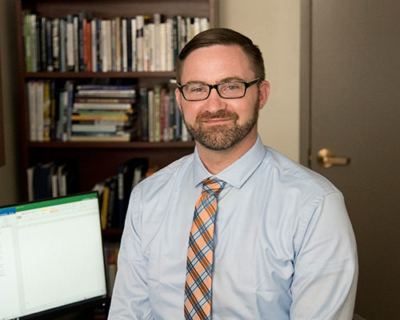 Between attending criminal justice classes in Alfond Hall classrooms that overlooked Sebago Lake and speaking at a press conference about new procedures for sexual assault crime investigations, Bradley Campbell ’09 has earned a doctoral degree at Sam Houston State University (SHSU) in Texas and accepted an assistant professor position at the University of Louisville, where his research is making news.

“I was exposed to the importance of research to criminal justice practitioners through senior seminar and research methods courses in the criminal justice curriculum at Saint Joseph’s College, as well as through service learning projects in courses offered by Dr. Dale Brooker and Dr. Katrina Hoop. One of those projects involved a community survey to study citizens’ perceptions of the Westbrook Police Department,” Dr. Campbell explained.

“Once we collected a representative sample, we analyzed the results and provided a report of our findings to the Westbrook Police Department. While working on this research project, I became hooked on collecting data that can help practitioners understand problems and find data-driven, evidence-based solutions to these problems,” he said.

At SHSU, Campbell joined a research team led by Dr. William Wells, chair of the Department of Criminal Justice and Criminology, which conducted a study for the Houston Police Department; this led to changes in the way the Department investigated sex crimes. Campbell is now drawing from that experience as principal investigator for the Kentucky SAFE Kit Backlog Research Project.

The discovery of this backlog prompted passage of a new state law that requires law enforcement agencies to collect kits within five days, to submit the kits to a laboratory within 30 days, to train officers on responses to sexual assault victims, and to notify victims about the progress of testing. It also led to funding of a competitive $50,000 award from the Kentucky Office of the Attorney General for an investigation into the cause of the backlog and to identify data-driven, victim-centered responses to sexual assault cases. In January 2017 Attorney General Andy Beshear announced that Dr. Campbell would lead the investigation.

“(Kentucky) wants to identify the root causes of the backlog so they can prevent it from happening again,” Campbell said. “This issue is important because these untested sexual assault kits may contain pieces of evidence that can hold offenders accountable and provide justice to victims.”

This research project is one of the first of its kind to be conducted at the state level.

“It’s going to provide valuable insight to not only Kentucky but to every other state facing this issue,” Attorney General Beshear said. “Good or bad, all of the results will be transparent.”

Saint Joseph’s College Criminal Justice Professor Dr. Dale Brooker remains in contact with Dr. Campbell, describing him as both a colleague and a friend. “Bradley is truly an example of our core values of excellence and integrity here at Saint Joseph’s College. He has embraced his role as a scholar with passion and he excels at what he does. In addition, it is evident (given his research) that he actively seeks to build trust in the community and with government agencies with the hope that his work is going to make a difference in our world.”

Dr. Brooker points to Dr. Campbell as a role model for Saint Joseph’s College criminal justice students who are interested in the scholarly aspect of criminology and criminal justice. “These scholars are needed to critically investigate the criminal justice system, to address key challenges and uncover and expose issues so that policy initiatives can be informed by evidence-based practices,” he said.