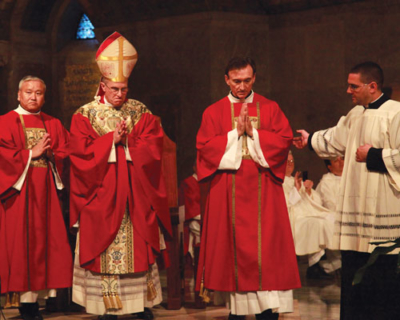 Originally from Saginaw, Michigan, Roy Mellon spent more than 20 years in the U.S. Air Force. Now retired and living in Korea for 11 years, he’s serving the U.S., the Catholic Church, and fellow believers in his new role as deacon. For Mellon, service has never meant so much.

How has the term “service” changed for you as a member of the military?

My military service gave me a background in many fields related to the aerospace industry, specifically in operations and maintenance of special mission aircraft. I am currently the area manager for my U.S.-based company’s operations in Korea. This has given me the ability to have a challenging career. It’s allowed me to care well for my family, and is also personally rewarding.

The other position is that of a permanent deacon incardinated with the Archdiocese for the Military Services, USA (AMS). In 2008, after attending a discernment retreat led by Archbishop Timothy Broglio from AMS, I said I would like to pursue the diaconate. I was told that the AMS did not have a program, and that I would have to wait until I left Korea to work with my home diocese. 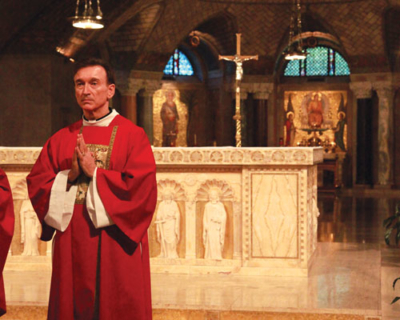 Did that mean you had to come back to the States?

I explained the dilemma to another AMS auxiliary bishop. Shortly after that he asked me to help him formulate a proposal to send to the archbishop to establish a pilot program for diaconal formation for the AMS. He specifically asked me to work on what is called the intellectual aspect of formation, or the academic portion. I did a “trade study,” as we call it in engineering, of all the academic institutions listed by the U.S. Council of Catholic Bishops on their website.

After weeks of research and discussions, I presented my analysis and findings to the bishop, and we agreed to propose the Master of Arts in Pastoral Theology (MAPT) program at Saint Joseph’s College Online as the academic qualification for the diaconate. We spoke many times with Deacon Dan Sheridan, PhD in the process.

Has serving abroad informed your work, both in the military and the Church?

This gives anyone a larger worldview. I believe living overseas and being multilingual inherently gives a person the ability to see things in ways that they normally couldn’t when their frame of reference consists of only one cultural environment. I am sure that living overseas has changed the way I view the world and has made me more understanding and compassionate. Everything that has happened in my life to date has contributed to my ability to be successful in my mission as well as with my activity in the Church.

The military has contributed to this calling as well. I am retired from the Air Force and have been a member of the parish community at the U.S. Army installation near my house since arrival in Korea in 2003. My language training through the military has enabled me to reach out to local residents.

Does serving God as a member of the military differ from its civilian counterpart?

Those who are called to serve those in service to their country are truly privileged. I can’t think of anything more rewarding at this time than caring for the spiritual lives of those who are dedicating their lives and are willing to sacrifice everything for the ones they love, God, family, and country.

When you wake up in the morning and look at where you are and what you are doing, what goes through your mind?

I feel amazement and happiness. Six years ago there was no way a permanent deacon could have been ordained for the AMS. In fact, my fellow graduate Deacon Joseph Pak and I are the first clergy ever to be ordained and incardinated specifically by the military archdiocese. I believe in miracles, for sure. I believe that anything is possible if you truly have faith in God.

My life to this point has been very rewarding. I have been blessed with a beautiful, loving family and the ability to care for them. It is now my privilege to serve others in any way I can, with the grace of God.